The word of inspiration on the Inspire Me Thursday illustration blog is “pear”. 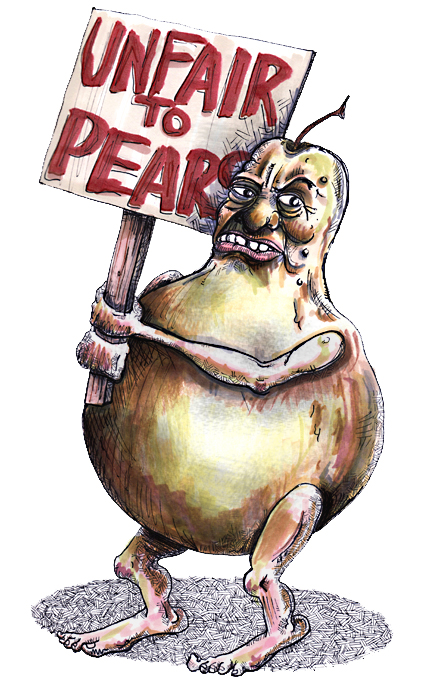 The poor pear. The pear has always gotten a raw deal. It’s been treated as a second-class fruit  the red-headed stepchild of the produce world.

New York City is “The Big Apple”, not the “Big Pear”.  An endearing term for a loved one is “the apple of my eye”. The noble apple stands for heart-stirring patriotism. It’s as “American as apple pie”, for goodness sake! Car enthusiasts long to paint their ride “candy apple red”, ’cause that would make it cherry. Apple sauce and apple juice are always at the forefront of baby’s first foods. As kids get older, Kellogg’s offers them Apple Jacks and McDonald’s offers apple slices as an alternative for french fries.

Apples even have enticing names like “Granny Smith” (how warm and homey!), “Red Delicious” and “Golden Delicious”. Do you think Steve Jobs just arbitrarily chose “Apple” for the name of his company? He didn’t go with “Pear” for a reason. Pears have stupid, almost unpronounceable names, like Bosc or D’anjou. And I don’t even know if I spelled those correctly. Sure, there’s Bartlett, too. Ever know anyone named “Bartlet”? He was that fat kid in elementary school. You know, the bookworm that everyone made fun of. And, of course, no one wants to be referred to as “pear-shaped”.

And it’s not just apples that overshadow pears. There are grapes with their tag as “Nature’s Candy”. The sour lemon is renowned for its deliciously refreshing summertime beverage. The mysterious pomegranate is also known as a Chinese apple to add to its appeal. There’s the sensuous strawberry, favored by candy-makers to dip into chocolate. There are bananas, with their splits and cream pies and their comedic notoriety from their peels. Slip on a banana peel and it’s funny. Slip on a pear peel and you’ll break your fucking neck. Even the exotic kiwi is chosen from a fruit basket before the lowly pear.

So, give a little support to the poor genus Pyrus L in the class of Maloideae in the subfamily Rosaceae.

And pass me an apple.