The illustration friday challenge word this week is “drifting”. 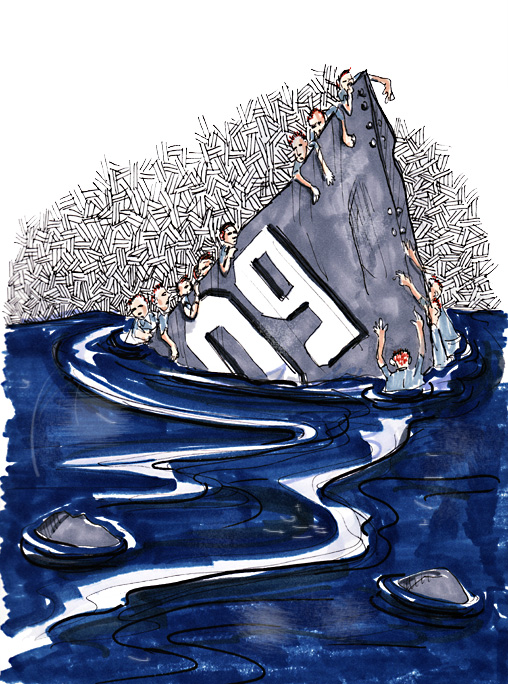 In August 1943, PT 109 was on night patrol in the South Pacific. At 2:30 in the morning, a Japanese destroyer came out of the darkness and cut the small Patrol Torpedo boat in half. The crew of thirteen was tossed about. Two crew members were lost, presumably killed on impact. Of the remaining eleven one was badly burned and another was sickened from swallowing fuel during the explosion. The crew clung to the ship’s forward hull and spent the next several hours drifting through flaming debris in the dark waters of the Pacific. They awaited direction from the young lieutenant who served as the PT’s commanding officer.

The crew knew they could not survive in the ocean. They knew the surrounding islands all contained enemy camps.  They needed to swim to Plum Pudding Island, a small outpost they knew was their only chance. Several crew members were too badly injured to swim on their own, especially Crewman McMahon, who was burned. Several others didn’t know how to swim at all. Using straps from life vests, the non-swimmers were tied to the hull. A harness was created and McMahon was lashed into it as the young commander, a veteran of Harvard’s swim team, towed McMahon as he swam. After a grueling four hours, the crew arrived on the island’s shore.

The island was only a hundred yards in diameter, with no food or water. The crew had to hide from passing Japanese barge traffic. The commander swam an additional 2 miles, to Olasana Island, which had coconut trees and water.

The crew survived for six days on coconuts. Two local islanders were investigating a Japanese shipwreck, from which they salvaged fuel and food. The young commander spotted them on their mission and began shouting to them. He convinced them they were on the same side of the war. He carved a message into a coconut and the islanders braved 35 miles of hostile waters in their canoe to deliver it to the nearest Allied base. The PT 157, commanded by Lieutenant William Liebenow, was dispatched to pick up the survivors of the PT 109.

The PT 109’s commander was decorated as a hero. He didn’t like the praise, claiming he was no hero – the enemy merely sank his ship. Although, he kept the inscribed coconut on his desk when he became President of the United States in 1961.

The commander of the PT 109 was John F. Kennedy.