This week, the challenge word on the Illustration Friday website is “parade”. 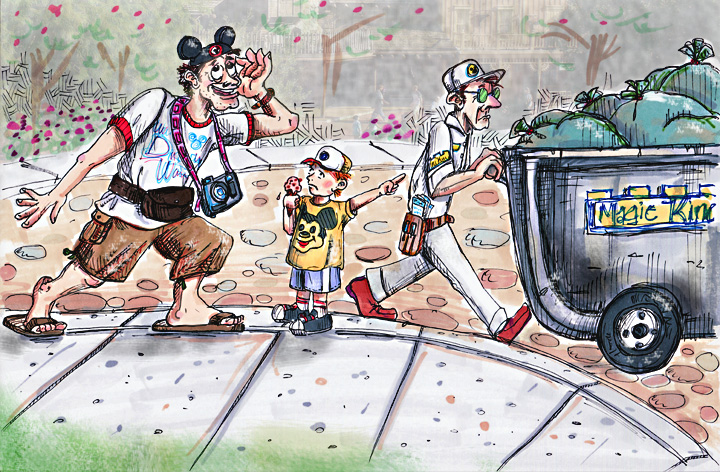 It has been made clear that I am a big fan of Disney theme parks. I’ve been to Walt Disney World in Florida and Disneyland in California many, many times. I have written about and illustrated many of my adventures in ol’ Walt’s entertainment enterprises. (Click HERE and you can see everytime I’ve mentioned “Disney”.)

In addition to the rides (“attractions”, as Walt preferred them to be called), the shows and the stuff to buy, a popular activity at both Disneyland and Walt Disney World is watching the daily parade. Families with smaller children particularly enjoy watching the parade, as this allows the kids to see their favorite Disney characters up close. It also allows Mom and Dad to stand in one place and keep a watchful eye on the kids instead of chasing them through the park’s maze of walkways. The parade route is similar in both Disneyland’s Magic Kingdom and its Florida counterpart. The parade floats emerge from a large but unassuming door at the head of Main Street USA, wind their way around the small park that harbors some benches and the park’s official flagpole, then make their way up the tourist-clogged Main Street. The parade then circles “the Hub” in front of Cinderella Castle (Sleeping Beauty Castle in Disneyland) and heads out to the walkway through Frontierland. Eventually, the whole parade ensemble returns to its original starting point at Main Street via a huge, unseen and interconnected backstage area. Due to space limitations in Disneyland, the parade is not able to turn around out of public view. The late afternoon performance of the parade, therefore, begins in Frontierland and retraces the route back to its origin on Main Street.

Because the parades are so popular, a prime viewing spot requires some shrewd planning. Seasoned parade watchers have the process down to a perfectly executed procedure, not unlike a drill-trained army regimen. Several hours before the designated parade start time, they will optically scour the walkways. They will mentally note and rank optimum viewing areas. Based on current park attendance, current and future positions of the sun and other variables, they will gather the members of their group, quicken their walking pace and claim the perfect piece of curbside real estate that will allow for heightened parade enjoyment. Sometimes, a portion of their plot is commandeered by some family of yahoos who obliviously wandered into previously-claimed territory. A strategically-placed full shopping bag usually discourages any further movement forward. If that fails, a well-placed elbow will do the trick.

On one particular trip to Walt Disney World, my family and I were getting ready to view one such parade. As long-time visitors to the Florida Magic Kingdom, we found a little-known viewing spot in Frontierland, near where the walkway splits and becomes the faux cobblestone streets of Liberty Square. Most visitors crowd into Main Street, eventhough the very same parade passes through the sparsely-populated Western-themed area mere minutes later. An hour or so before the parade was to make its way to us, my wife, my then-young son (he’s 21 now, and curiously, is still excited by Disney parades) and I were standing in Frontierland, patiently amusing ourselves. We looked in the windows of shops, careful not to stray too far from our three-person parade zone. We discussed which attractions we would visit after the parade. I’m sure a discussion of snacks came up in our pre-parade conversation. As the parade time slowly drew closer, the areas around us began to fill in with other families. To our right, an empty spot welcomed a dad about my age and his son, a boy around the same age as my own son. Dad was doing his best to engage Son in similar pre-parade entertainment. Son, however, was far more interested in defusing the dripping ice cream cone he held tight in his sticky fist. Dad warbled a brief medley of popular Disney film tunes, tripping over or misinterpreting the bulk of the lyrics. Suddenly, a distant thumping caught Dad’s ear. He cocked his hand to his ear in an exaggerated fashion. The thumping got louder. THUMP-THUMP-THUMPITY-THUMP!  Dad’s smile widened. “Hear that?,” he excitedly asked Son. Son continued to eye the ice cream. THUMPY-THUMPY-THUMP-THUMP!  “Oh!,” grinned Dad, “I hear drums! The parade is coming!” THUMP-THUMP-THUMP!  “I hear drums!,” Dad continued, hand still theatrically cupped to his ear, “The parade is coming!” Son finally looked up. In the distance, he spied the source of the thumping. The same source that everyone in the immediate area also spied… everyone but Dad, that is. A Disney custodial worker was pushing a large plastic refuse container loaded with dark-green bags of theme park trash. The employee was steering the rubbish across the cobblestones of Liberty Square, towards an unseen depository. With every bump of the wheels, a rhythmic thumping filled the air. Son pointed at the laborer and his cartful of trash. “Daddy, no,” he began, “Trash. The man has trash.” “No! No! No!,” Dad happily corrected, “I hear the drums!” Son continued to point, showing his proof like a proud prosecutor in court. “Daddy. That man is pushing trash.” Dad once again cut him off. “Drums!” Dad insisted, his voice reaching a climactic crescendo, “I hear drums! The parade is coming!”

Exasperated, Son rolled his eyes and returned to his ice cream.