The challenge word this week on Monday Artday is (by my suggestion) “yecchh!” 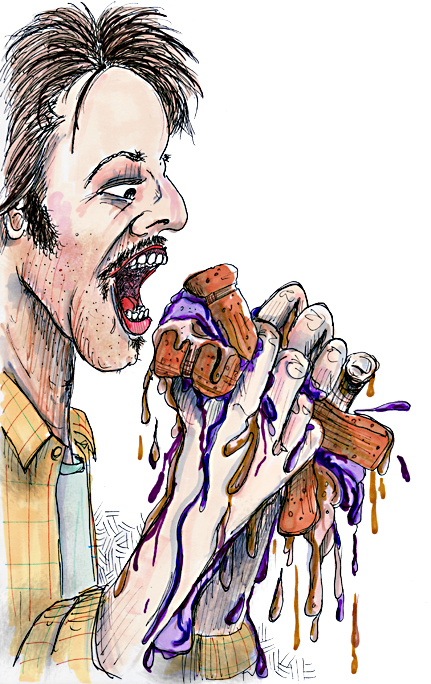 I love peanut butter and jelly sandwiches. I always have. The drippier and gooey-er the better.

Before I began this illustration, I was inspired by an illustration of peanut butter and jelly done by my friend and fellow artist Matt Can Draw. Matt is ridiculously talented and is the reason I started this blog.

I met Matt several years ago when we both worked in the marketing department in the corporate headquarters of a large chain of after-market auto parts stores. We were two of a roomful of artists who diligently worked to produce weekly color newspaper circulars. We all spent long hours hunched over our Macs, arranging tiny pictures of oil filters and brakes shoes, checking and re-checking prices and making sure our mail-in rebate offers added up correctly. When we were finished, we translated the whole shebang into Spanish, thanks to the invaluable assistance of our in-house translator, as no one was versed in that particular romance language… outside of the menu at Taco Bell.

Matt’s cubicle was two away from mine. We were separated by a guy who spent more time surfing websites on his quest to free the inhabitants of Middle Earth than he did on his advertisements. One day, while waiting for a particularly large ad to make its way through the print queue to the giant color printer, I walked by Matt’s desk. He was doodling as usual. I commented that his drawing looked my drawings. Matt turned his head toward me, a puzzled look on his face. “You draw?,” he asked. “Yeah, I draw.,” I replied, “I’ve been drawing since I was four years old.” Matt was shocked. “I’ve never seen you draw.,” he said, still not shaking his surprise. Suddenly, his look of astonishment turned to contempt. “You know how to draw… and you don’t?, ” he sneered, “You should be ashamed of yourself.” I have ten years on Matt, but this guy was scolding me!  He seemed to be holding himself back from grabbing my shirt collar and shaking me. “When you leave work today,” he began his order, “you go and get yourself a sketchbook and start to draw again. Jeez!” As I slunk back to my desk, I still heard him muttering about me and shirking my illustrative obligation to the world. But, he was right.

That evening, I bought a sketchbook. That night, I began to draw again. That was almost three years ago.