The illustrationfriday.com challenge word this week is “talisman.” 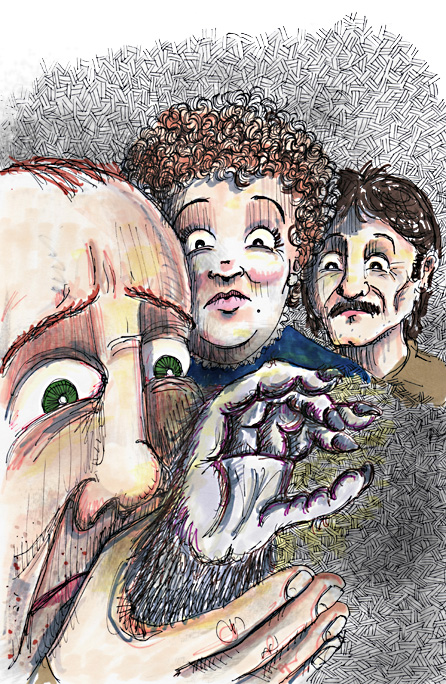 The Monkey’s Paw
A man, a woman and their grown son received a visit from the man’s friend – a sergeant in the military. The sergeant brought the family an artifact from his world travels — a monkey’s paw. He explained that the withered simian appendage possessed magical powers and that the owner would be granted three wishes. The family was intrigued. Suddenly, the sergeant tossed the paw into the fire raging in the hearth. The man quickly retrieved it, cradling the near-charred talisman in his lap. “Better to let it burn, cursed thing!” said the sergeant. “It will only cause you trouble.”

After a while, the sergeant bid farewell to the family and left their home. The man closed the door behind his friend and turned his attention to the monkey’s paw. His family gathered around him. They gazed in wonder at the paw. It was small, gray and wrinkled with bent and gnarled fingers. A dark nub of a bone protruded from the severed wrist. How could such an hideous object offer such cheerful promise. The sergeant’s story must have been just that — a story. The family stood silent, in deep reflection, until the man said, “Well, what have we to lose? I’m going to try a wish. What the heck!” He thought for a moment. “We could always use some money. I don’t want to be greedy. How about a thousand dollars!”, he said as looked to his family for approval. The woman and the son stared in terror as the man lightly the rubbed the paw and spoke. “I wish I had a thousand dollars”, he said. He dropped the paw to the floor. “It moved!”, he shrieked, “I felt the damn thing MOVE!” The family looked around their modest home. Nothing. No money.  Just as they had expected. Disappointed, they went off to bed.

The next morning, the family had forgotten about the events of previous evening. The son left for his job at a local factory. Several hours later, there was a knock at the front door. The woman answered it. On the doorstep was the son’s supervisor from the factory. He held his cap in his hands and his head was bowed. He looked up at the woman with tear-filled eyes. “There was an awful accident, ma’m.,” he began, “Your son has been killed. I’m so sorry.” The woman burst into tears. The man rushed to the door to comfort his wife.

The next day was the son’s funeral. Family, friends and co-workers gathered at the home and offered their condolences to the man and woman. The son’s supervisor approached the couple. He drew an envelope from his jacket pocket and presented it to the grieving parents. “We took up a collection at the factory,” he said, “We hope it helps. Your son was a great worker and a good guy.” The supervisor left with the other mourners. When the house had cleared, the man opened the envelope. He gasped. It contained exactly one thousand dollars. The man turned to his wife. “It worked!”, he proclaimed, “The paw worked.” His wife countered, brushing off the notion as  pure coincidence. “It isn’t coincidence! In its own twisted way, that paw grants wishes.,” the man said. The woman answered, “Sure, but at the expense of our son’s life!” The man thought for a moment then spoke. “Perhaps we should have been more specific in our wish.,” he said.

A few weeks went by, but the man and the woman were still distraught over their loss. The woman was half-heartedly cleaning the home to distract her thoughts. She came across the monkey’s paw in a drawer. She held up the primate appendage and turned to her husband. “I will wish our son back to us!”, she said gleefully, “This thing took him away. It can bring him back.” The man replied, “I don’t think that’s a good idea. I think we should just get rid of that thing and never talk about it again.” The woman was adamant. She held the paw before her and uttered her request. “I wish my son would come back home!”, she said. Suddenly, from downstairs, they heard a loud knocking on the door. The man and the woman looked at each other in shock. “He’s back!,” cried the woman, “My son has come back!” The man grabbed her shoulders and shook her sharply. “It’s been weeks since he died! He has been decomposing in the grave! And it was a closed casket funeral! Remember the accident? His head was completely crushed!”, the man yelled at his wife. “No!,” she protested, “My son is out there! I must let him in!” “But, again, you weren’t specific in your wish! You just wished he would return home!,” the man clamored “Whatever horrible thing is knocking on our front door  — it isn’t our son!” The woman pushed him away, turned and rushed to the stairs, all the time calling out, “I’m coming, my son!” In her haste, she dropped the monkey’s paw.

The knocking continued – slow and methodical and relentless. She raced down the staircase and bounded towards the door. The man picked up the paw and followed, just steps behind his wife. Then, a thought entered his mind. He stopped and held the paw before him. He closed his eyes and wished. “Man, am I hungry. I’d like a half-rack of barbecued ribs and a side of cole slaw. Nah, better make it a full rack.”