The Monday Artday challenge word this week is “bunny”. 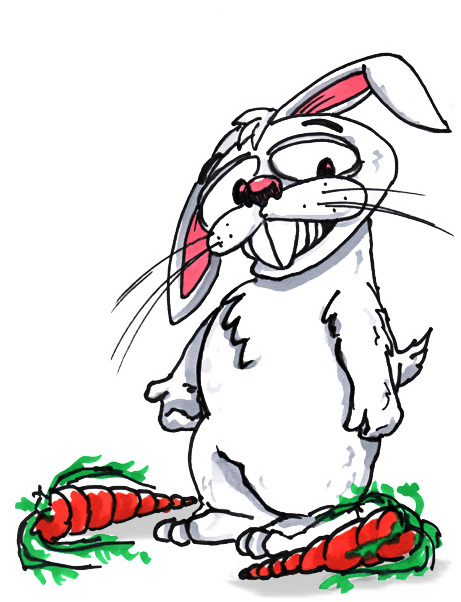 Elroy Bunny eyed his prey from a distance. From fifty feet away, he could see neat rows of emerald flora as they cascaded over the dirt mounds. A hint of thick auburn taproot poked out of the earth beneath each lacy green canopy. Elroy stood motionless, his back pressed flat against the whitewashed garden fence, his chest barely moving with shallow breaths. In the fading light of dusk, Elroy’s eyes were wide, straining to stay trained on his predetermined path of invasion. In his mind, he carefully played and replayed his maneuver. He would stay low to the ground, sticking stealthily close to the orderly succession of carrots. As he crept along, he would quickly scrutinize each rust-colored specimen and select the perfect one for tonight’s meal. Elroy closed his eyes and envisioned himself munching and savoring that sweet and wonderful root.

Back at his clan’s nest, food was scarce. Elroy’s mother dutifully rationed the meager provisions. The weekly allowance, usually filched from unattended gardens or nearby garbage receptacles, was stretched diaphanously thin and provided little sustenance. To make their situation worse, the family had to fend off foxes or rats who would steal their food right out of the nest. After all, Elroy and his brood were cottontails and they didn’t have the luxury of an intricate network of underground warrens in which to hide their food like other rabbits. Elroy didn’t like feeling helpless as much as he didn’t like the empty feeling in his belly.

As nighttime advanced, Elroy knew he had little time to make his move. He hunched down, prone against the slightly damp soil, shrouded by the overgrown leafy greens. To his left, the carrot’s stout, thumb-like heads peeped out of the terrain. He skulked silently alongside the queues, inspecting the bounty offered before him. Elroy spotted a glistening, orange-skinned beauty. He craned his little neck and wiggled his little pink nose at the vegetable. The aroma of clean vegetation and honeyed goodness overwhelmed his olfactory nerves. In one fluid motion, Elroy yanked the carrot out of its dirt trammel, aimed it at his salivating maw and sank his incisors into its firm but yielding flesh. It crunched. Elroy shivered with elation. Tears welled in his eyes as his mouth was filled with crisp, delicious morsels and his appetite was quenched. That carrot was pure jubilation for Elroy’s very existence. Suddenly, Elroy’s euphoria dispersed. The porch light at the distant farmhouse snapped on, illuminating the garden with a harsh, tungsten-filament beam. The bathrobe-clad farmer bounded out from the splintery wooden doorway. He gripped a shotgun in his withered and twisted hands, from which he blasted several warning shots into the evening sky. Elroy panicked. He leaped over the green herbage, wedged himself under the fence and scampered away.

This was what Elroy Bunny’s life had become. Years ago, his father disappeared. Unbeknown to the family, he, along with hundreds of other rabbits, had become part of a woman’s coat. Out of necessity, his mother became adept at gathering food. Early on, she brought home overflowing surpluses, but in recent years she had become too old and feeble to perform this task. The few crumbs that she was able to provide certainly didn’t last very long. If Elroy wanted to eat, he had to locate food for himself. He knew he couldn’t rely on anyone else especially his sloth-like brother. Elroy’s brother was treated like royalty by Mother. The general routine was Mother and Elroy maintained order in the nest, while he sat on his fluffy ass, scarfing down more than his share of the food. He exerted no energy, save for that one day a year. Elroy would periodically ask him to pitch in, but he protested, reminding Elroy of his importance and claiming the need to conserve his strength. And, of course, Mother would always come to his defense. Elroy fully understood his brother’s worldly responsibility, but he felt it was unfair. Elroy was kind, humble and considerate, but he knew his place and, although he felt slighted, he never complained. Though the reasons weren’t exactly clear, Elroy accepted the hand that life dealt him. When characters were chosen to represent each of the major holidays on the calendar, Jesus himself skipped Elroy and selected his brother to be The Easter Bunny.