The inspirational word this week on the Inspire Me Thursday illustration blog is “ghost”. 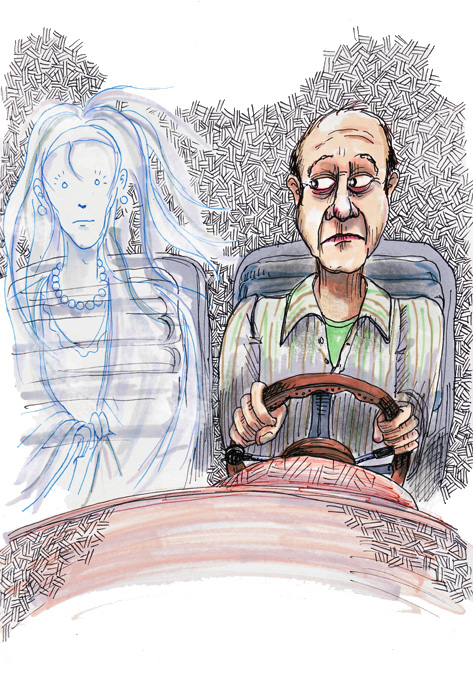 Resurrection Mary is the Chicago area’s best-known ghost story. The story takes place outside Resurrection Cemetery in Justice, Illinois, a few miles southwest of Chicago.
Since the 1930s, several men driving northeast along Archer Avenue between the Willowbrook Ballroom and Resurrection Cemetery have reported picking up a young female hitchhiker. This young woman is dressed somewhat formally and said to have light blond hair, blue eyes, and wearing a white party dress. Some more attentive drivers would sometimes add that she wore a thin shawl, or dancing shoes, and that she had a small clutch purse, and is very quiet. When the driver nears the Resurrection Cemetery, the young woman asks to be let out, whereupon she disappears into the cemetery. Sometimes, the story ends there. Other times, the curious driver follows the girl into the cemetery and finds her shawl or purse on a grave marked “Mary”.
The origin of the legend tells of a young girl named Mary who had spent the evening dancing with a boyfriend at the Oh Henry Ballroom (now the Willowbrook Ballroom). At some point, they got into an argument and Mary stormed out. Even though it was a cold winters night, she thought she would rather face a cold walk home than spend another minute with her boyfriend.
She left the ballroom and started walking up Archer Avenue. She had not gotten very far when she was struck and killed by a hit-and-run driver, who fled the scene leaving Mary to die. Her parents found her and were grief-stricken at the sight of her dead body. They buried her in Resurrection Cemetery, wearing a beautiful white dress and matching shoes.

This post marks the two-year anniversary of the josh pincus is crying illustration blog.