The inspirational word on Inspire Me Thursday is “silver”. 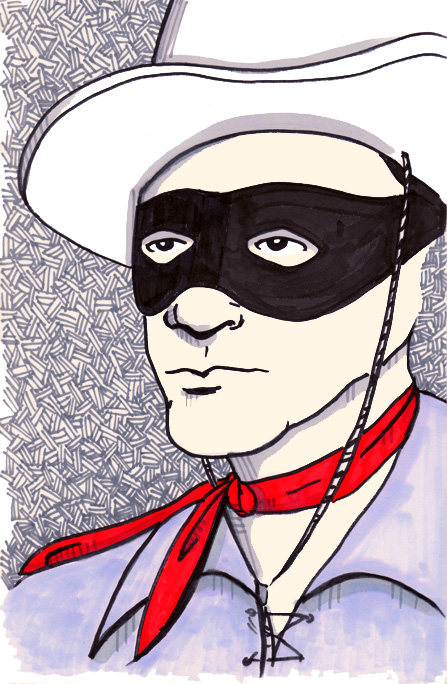 Long before Bob Denver, Fred Gwynne and Barry Williams were typecast in an acting role, there was Clayton Moore.
Moore’s big break came in 1949, when George Trendle spotted him in “Ghost of Zorro”. As producer of the radio show and creator of “The Lone Ranger” character, Trendle was about to launch the masked man in the new medium of television. Moore was cast on sight.
Moore trained his voice to sound like the radio version of The Lone Ranger, which had been on the air since 1933. Accompanied by the strains of Rossini’s “William Tell Overture”, announcer Fred Foy gave the Lone Ranger his famous introduction: “A fiery horse with the speed of light, a cloud of dust and a hearty “Hi Ho Silver!” The Lone Ranger. “Hi Ho Silver, away!” With his faithful Indian companion Tonto, the daring and resourceful masked rider of the plains, led the fight for law and order in the early west. Return with us now to those thrilling days of yesteryear. The Lone Ranger rides again!”
Moore and his co-star Jay Silverheels, in the role of Tonto, made history in the first Western written specifically for television. The Lone Ranger soon became the highest-rated program on the fledgling ABC network and its first true “hit,” earning an Emmy nomination in 1950. After completion of two Lone Ranger feature films, Moore embarked on what became 40 years of personal appearances, TV guest spots, and classic commercials as the legendary masked man. Silverheels even joined him for occasional appearances during the early 1960s.
In 1979, the owner of the Lone Ranger character, producer Jack Wrather, obtained a court order prohibiting Moore from making appearances as The Lone Ranger. Wrather anticipated making a new film version of the story, and did not want the value of the character being undercut by Moore’s appearances This move proved to be a public relations disaster. Moore continued to make appearances by changing his costume slightly and replacing the mask with wraparound sunglasses. Moore then counter-sued Wrather. Moore eventually won the suit, and was able to resume his appearances in costume, which he continued to do until shortly before his death in 1999.
In keeping with the nature of the character, Moore chose to protect the Lone Ranger’s identity at all times and is perhaps the only actor whose face is largely unknown to the public.