The challenge word on Monday Artday this week (at my suggestion) is “money”. 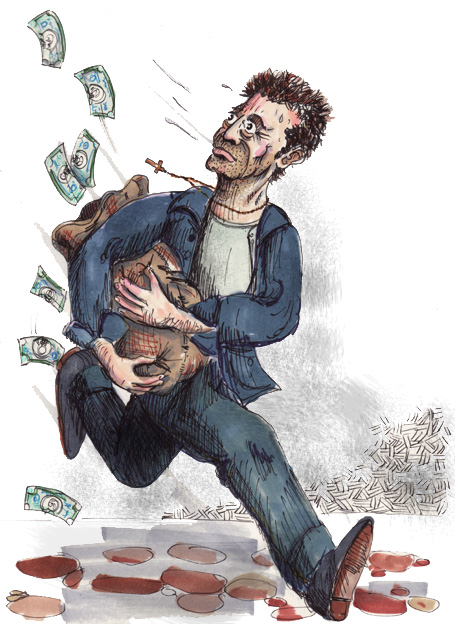 On February 26, 1981, in Philadelphia, a twenty-eight year-old, meth-addicted, unemployed longshoreman named Joey Coyle had his life changed forever. Joey and two of his friends were on their way to buy drugs. They were driving behind a Purolator Armored Services truck that was returning from a pick-up at an Atlantic City casino. As the truck pulled away from a stop light, its back doors swung open and two money bags, containing 1.2 million dollars, fell out. As Joey grabbed the bags, his troubles began. Joey’s friends tried to convince him to return the money, but Joey could only see dollar signs in his eyes. He became the most popular guy at a South Philadelphia bar, handing out hundred dollar bills and bragging about his windfall.
Later, becoming nervous and paranoid, Joey tried to launder the money through some mob connections. Meanwhile, Joey’s friends, who were with him when he found the money, told authorities. Joey was a wanted man and planned his escape. However, he was arrested at Kennedy International Airport as he was checking in for a flight to Acapulco, Mexico. He was carrying $105,000 in 21 envelopes with $5,000 each. The envelopes were stuffed around his ankles in the tops of elastic socks. In February 1982, a jury found Joey innocent of theft by reason of temporary insanity. The armored car company recovered all but roughly $196,000 of the money.
In 1993, while awaiting sentencing for his sixth drug conviction, Joey hanged himself with an electrical cord.