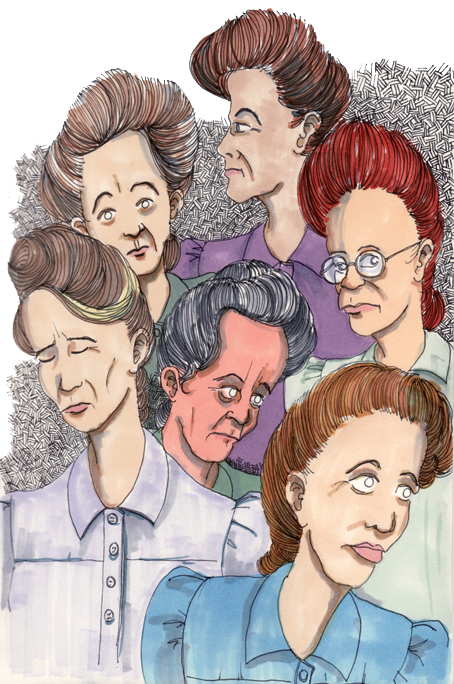 The story of the YFZ (Yearn for Zion) isolated compound in Texas has been front and center in the news for the past few weeks. One of the most intriguing parts of this story is the women of the community. Since the first pictures of the women surfaced, I know I have been fascinated by their appearance. They all seem to share similar characteristics. They are very soft-spoken. They speak slowly, deliberately and monotone. They all have that same calm and far away look in their eyes.
I have seen several television interviews with some of the women, where they were questioned about their plain, solid-colored, pastel dresses and their plain yet elaborately arranged hairstyles. One woman eerily smiled and said their clothes and hairstyles have no significance, that they make their own clothes and they all like to wear long hair.
I read a conflicting explanation. It said: “the dresses are meant to show modesty and conformity. They go down to the ankles and wrists, and are often worn over garments or pants, making sure every possibly provocative inch of skin is covered. The appearance of unity through uniform dress, however, can belie the jealousy that often arises when the women  who might all look alike to an outsider  find themselves in competition with one another over the affections of the same man. The clothing is also stitched with special markings “to protect the body and to remind you of you commitment.” The report went on to explain the hairdos, saying “the women never cut their hair because they believe they will use it to wash Christ’s feet during the Second Coming. A Biblical quote says a woman’s hair should be her crowning glory.”

It brings to mind the Rado/Ragni lyrics….
They’ll be ga-ga at the go-go
when they see me in my toga
My toga made of blond, brilliantined, Biblical hair
My hair like Jesus wore it
Hallelujah I adore it
Hallelujah Mary loved her son
Why don’t my Mother love me?