This week’s challenge word on illustrationfriday.com is “garden”. 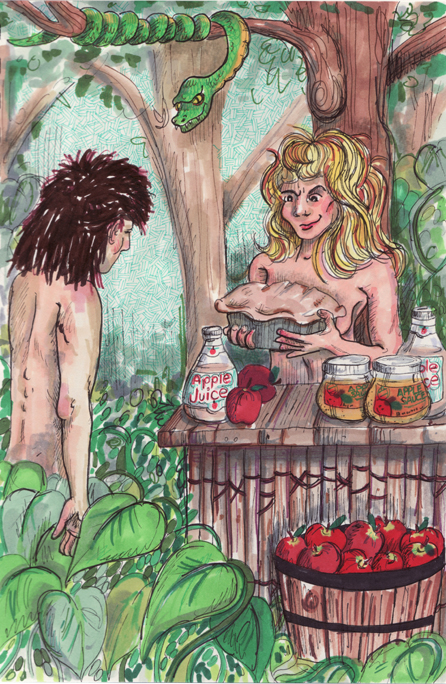 In the Garden of Eden (or as Iron Butterfly said “In-A-Gadda-Da-Vida”) story from Genesis, God molds Adam from the dust of the Earth, then forms Eve from Adam’s “side”, and places them both in the garden, eastward in Eden. “Male and female he created them; and blessed them, and called their name Adam, … ” It may be allegorical, in as much as “Adam” may be a general term, like “Man” and refers to the whole of humankind.
God charges Adam and Eve to tend the garden in which they live, and specifically commands Adam not to eat from the Tree of the Knowledge of Good and Evil. Eve is quizzed by the serpent why she avoids eating of this tree. In the dialogue between the two, Eve elaborates on the commandment not to eat of its fruit. She says that even if she touches the tree she will die. The serpent responds that she will not die, rather she would become like a god, knowing good and evil. Eve then eats from the Tree of Knowledge of Good and Evil and persuades Adam to eat from it too. God doesn’t take too kindly to being disobeyed. He finds them, confronts them, and judges them. God kicks them out of Eden, to keep Adam and Eve from partaking of the Tree of Life. At the gates of Eden, God places cherubim (angels) with an omnidirectional flaming swords to guard against any future entrance into the garden.
After they were removed from the garden, Adam was forced to work hard for his food. Eve went on to become the first CEO of Motts.