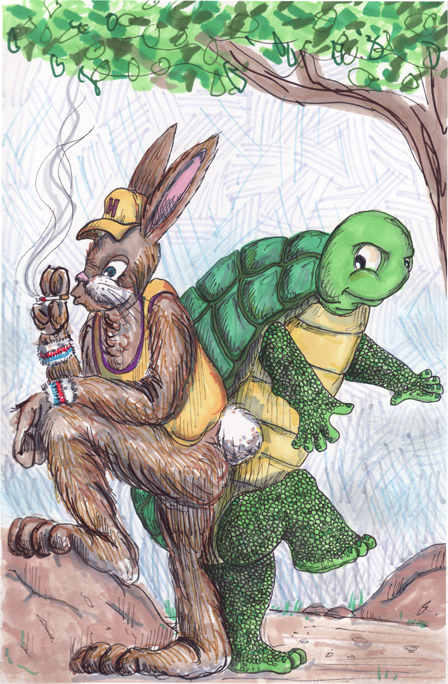 Once upon a time a tortoise and a hare had an argument about who is faster. They decided to settle the argument with a race. They agreed on a route and started off the race. The hare shot ahead and ran briskly for some time. Then seeing that he was far ahead of the tortoise, he thought he’d stop to have a cigarette and relax before continuing the race.

He stood next to a big, impressionistically-drawn rock and fired one up. The tortoise plodding on overtook him and soon finished the race, emerging as the undisputed champ. The hare finished his cigarette, was diagnosed with emphysema, lived out his remaining days in an iron lung and died. Oh, and he lost the race.

The moral is stated at the end of the fable as: “Smoking will kill you”.
Or something like that.

NOTE: I did this drawing last night. This morning I saw a commercial for Chantix, a new drug to help people stop smoking. They use the tortoise and the hare in their commercial. I had not seen this commercial prior to my illustration. Hmmmm…