This week’s word over at illustrationfriday.com is “moon” 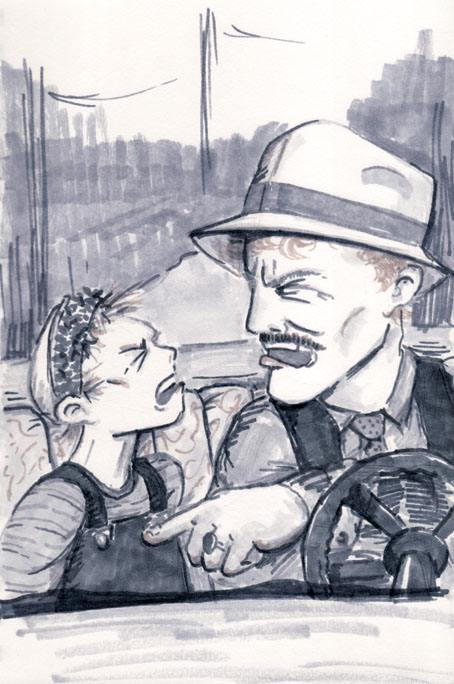 Paper Moon is a classic, if not underrated, American movie, It was directed by Peter Bogdonovich, fresh off the acclaim of The Last Picture Show. The film starred the hottest actor of the time, Ryan O’Neal as con-man/bible salesman Moses Pray and his then 9-year old daughter, Tatum as wayward Addie Loggins, a waif put into the charge of Moses, who may or may not be her father. The story takes place in a Depression-era midwest United States (changed from the novel’s setting of the deep south). Bogdonovich was searching for a better title for the film. He didn’t like the novel’s title “Addie Pray”. After going through music he had chosen for the soundtrack, he came across the song “Paper Moon”. He asked his mentor, Orson Welles, his feelings on using that as a title. Welles replied that it was so perfect, he should not bother making the movie and just release the title. Welles also suggested that the film be shot in black and white through a red filter to give it a high-contrast, period look.

Paul Newman and his daughter, Nell Potts, were originally cast when the project was slated to be directed by John Huston. When Huston bowed out, so did Newman. Bogdonovich was signed on and the O’Neals were brought in. This was supposed to be a one-shot deal for little Tatum, as her dad wanted to keep her out of the motion picture business. Obviously Hollywood and Tatum had different plans. Tatum went on to win the 1974 Oscar for Best Supporting Actress (beating co-star Madeline Kahn) and becoming the youngest Oscar winner in a competitive category (Shirley Temple was given an honorary award at age 6). Despite her father’s original wishes, Tatum went on to make a dozen more movies.