The weekly challenge word over at Monday Artday is “warrior“.
Here’s how I arrived at this: 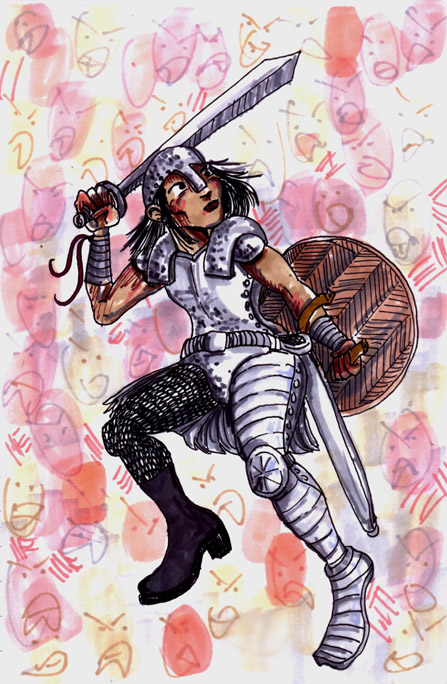 I searched warrior at wikipedia, and I came up with a general description of war and battles and the people who love them. Then I came to a section about women warriors, specifically a character named Vishpala.
Vishpala was a woman in the Rigveda, a collection of Vedic Sanskrit hymns dedicated to Rigvedic deities. It is counted among the four Hindu sacred texts known as the Vedas.
Vishpala is helped in battle by the Ashvins (the doctors of gods). She lost her leg in Khela’s battle and they gave her a “leg of iron” so that she could keep fighting. Cool!
This immediately brought to mind Rose McGowan’s character in the “Planet Terror” segment of “Grindhouse“.

Many, many years ago, when I was in art school, I was taught to always look for reference material (or ‘scrap’) before doing an illustration. I searched Yahoo and Google for Female Warriors. This resulted in page after page of predominantly two things: scantily-clad Frazetta amazons wielding giant broadswords and pictures of Xena. I thought, “If these women are headed for battle, wouldn’t they be covered in armor?”

So, no femme fatale military bimbos for me. My Vishpala is using her new, god-given iron leg to kick some enemy ass!

Let me know what you think.