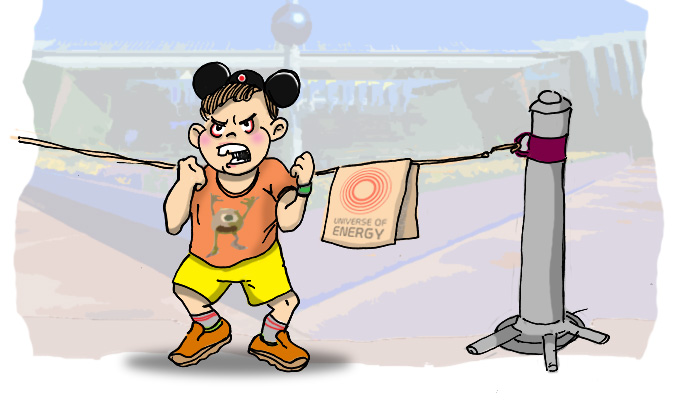 My family went on an adventure to Walt Disney World last week. On the day we chose to visit EPCOT, we queued up for Universe of Energy, a fun and educational presentation featuring Ellen DeGeneres, Alex Trebek, Jamie Lee Curtis, Bill Nye the Science Guy and a cast of assorted dinosaurs. Guests are treated to an integrated combination of film and Audio-Animatronic figures delivering a message of… oh, I don’t know… something about energy. To be honest, I have a tendency to doze off somewhere in the middle of the 45-minute presentation.

When we arrived at the entrance of the massive building that houses the show, a show was already in progress. The attraction can accommodate 1500 guests at one time, with three shows running simultaneously, so it is very likely that all those waiting outside will get in to see the next show, even at the park’s busiest times. So, we took a seat on a low wall that lined a manicured arrangement of colorful flowers and shrubbery, all beautifully landscaped in the perfect Disney tradition. We were soon joined by other guests who scattered themselves about the large waiting area outside the tinted entrance doors. A mother walked up with a small boy of about five years-old. He was a typical kid, so we really didn’t take notice until…

If you have visited any Disney theme park, you know that — within minutes — you become accustomed to waiting in line. Disney, like most similar entertainment parks, has a very elaborate but easy-to-follow system of waiting in line. Most rides are equipped with a network of rails and chains and poles and ropes to create a path that leads guests to the boarding area in an efficient and orderly fashion. After a while, queuing up and waiting in line becomes second nature. Wanna go on a ride? Get in line. Soon, you don’t even think about it, you just do it.

Well, this little boy had quickly grasped the concept of waiting in line and he was not going to stray from what he was taught by the good folks at Disney. The entrance to Universe of Energy was mildly occluded by a thin rope stretched between two shiny metal poles. The little boy surveyed the area — the rope, the closed doors, the other guests scattered casually about — and frowned. He turned to his mother.

“Where does the line start?,” he asked.

His mother smiled and explained that the building is so big that all of these people will get in when the doors open.

He frowned again and furrowed his tiny eyebrows. “But where is the line? Where does it start?,” he demanded. His tone grew agitated, his words clipped. His mother, again, offered her explanation in a calm manner. “Honey, there is nothing to worry about. We will all get in. All of these people will get in.”

The kid wasn’t buying it. He grit his teeth and seethed, “But, where does the line start?” His voice lowered almost to a growl. His small neck tensed and his hands curled into fists.

His mother tried once more to pacify the boy, but he wanted no parts for her pathetic reasoning. “Dear, we will all —”

He cut her off. “JUST TELL ME WHERE THE LINE STARTS!,” he implored, “WHERE IS THE LINE? WHERE DOES IT START?”

His exasperated mother attempted to repeat her unconvincing claims of admission to the attraction, but the boy would not hear it. He was furious. He flung himself to the ground and kicked his feet. “WHERE IS THE LINE? WHERE IS THE LINE? TELL ME WHERE THE LINE STARTS!” His face was flushed and he looked like he was on the verge of frustrated tears.

The doors finally opened and the gathering crowd filed in. Once inside the building, everyone entered a large, cavernous room lined on one side with five huge movie screens placed high on the wall. Some guests took seats at the rear of the room on a long, futuristic-looking bench. Others stood on the dark red carpet, while others just planted themselves cross-legged right on the floor.

Now, the little boy saw that his mother had told the truth and there was, indeed, no line. He scanned this large room, turned to his mother and asked, “Now where does the line start in HERE?”