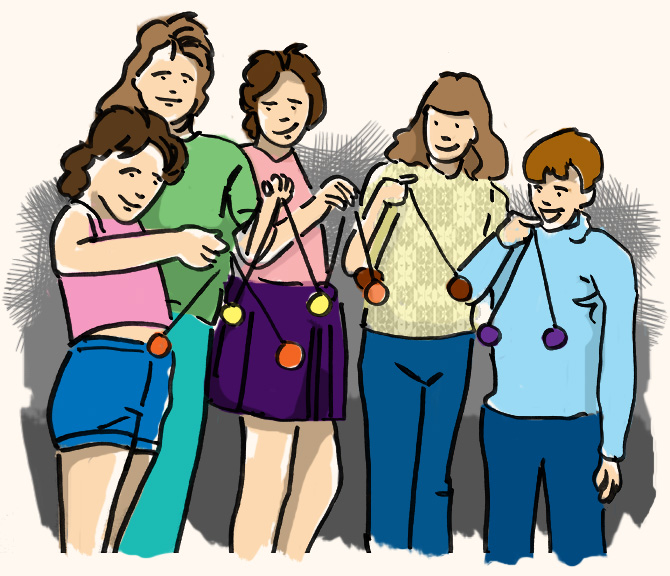 In the pre-hand held electronic device days, before Nintendo DS and iPads, toys didn’t take batteries. Board games, like Mousetrap, Hands Down and Mystery Date (for girls) were powered by a roll of the dice or a flip of a card. When we played politically-incorrect games like Cowboys and Indians, we used die-cast cap pistols that were loaded with a roll of paper caps that were probably dangerous. Water pistols were powered by, um, water. Hot Wheels cars got their power from a flick of the wrist.

I remember one cool, no-batteries-required toy that was extremely popular for a short period of time. In the late 1960s, when I was in elementary school, some toy company (it is unclear which one, because they were marketed under many different names) introduced a pair of heavy acrylic balls attached to a heavy piece of cloth cord. The one I had were called “clackers.” The object was to hold a plastic tab at the center of the cord and, through a bit of wrist shaking and manipulation, cause the balls to bang together. This would accomplish several results: 1) the balls would make a “clacking” sound (hence the name); 2) the owner would enjoy hours and hours (well, maybe minutes and minutes) of fun and; 3) the balls could shatter, blasting dangerous shards of sharp plastic in all directions if they were slammed into each other too hard.

Clackers were eventually banned on the playground of my school and many others across the country. However, by the time the ban was put into effect, we had grown bored with Clackers and moved onto something else (probably Footsie for girls and Super Elastic Bubble Plastic for boys).

Clackers made a feeble attempt at a comeback in the 90s, but they were no competition for Game Boy.

And they were banned again.