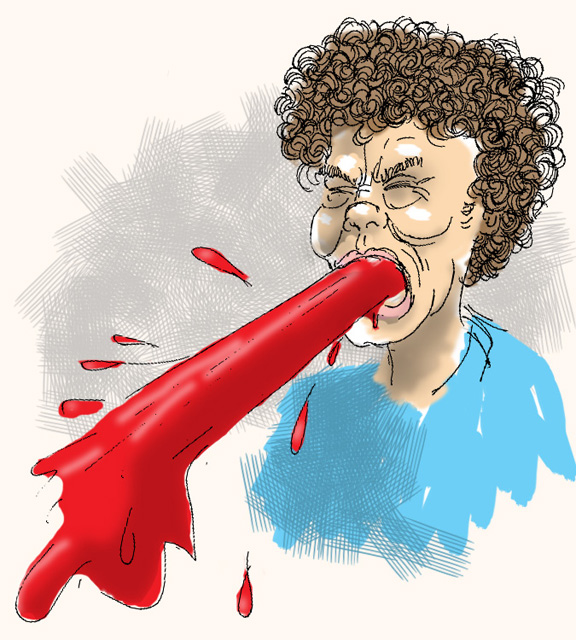 Everybody likes a good vomit story.

When I was in high school, my parents regularly went to a resort in the Catskill Mountains for the final weekend of March. While they were busy packing, I, too, was busy with plans of my own. I was making arrangements to have a couple of friends over for a weekend of drinking, drinking, drinking, and perhaps, if there was any time left, some drinking.

Before I continue, let me offer some justification to you young and impressionable kiddies out there who see ol’ Josh Pincus as some sort of role model.  When I was eighteen years old, the legal age for alcohol consumption in the state of New Jersey was eighteen. It was legal for me to purchase and consume alcoholic beverages in New Jersey. What’s that you say? I didn’t live in New Jersey and crossing state lines with alcohol is illegal? A technicality that, 34 years after the fact, I choose to ignore. The point is: I purchased liquor myself and it was (sort-of) legal. Okay? Stay in school, kids. And now, back to our story…

I invited my pals Scott and Alan to stay the weekend while Mom and Dad Pincus were away. We met at my house after school and, with my parents already gone since that morning, headed out to stock up on liquid refreshment. We piled into my car and crossed the Tacony-Palmyra Bridge from Pennsylvania into free-flowing, booze-soaked New Jersey. As we descended the bridge’s off-ramp, I navigated into the first liquor store parking lot. Alan and I beat a path toward the beer cooler, but Scott detoured into the aisles of bottled liquor.

“Where is he going?,” I asked Alan, as I watched Scott eye the decanters filled with amber and scarlet liquid usually reserved for people our parents’ age. Alan shrugged and continued on towards the beer.

We selected two (maybe three) cases of beer and met up with Scott at the checkout line. He was holding a flat, square pint bottle filled with what looked like cough syrup. The colorful, but decidedly old-fashioned looking label declared the contents as “sloe gin.”

“What the fuck is that?,” Alan and I both asked simultaneously.

“Someone told me this is really good,” Scott explained, “and it gets you drunk really fast.” We laughed at the promise, paid for our stuff and started back to my house.

Hours and several pizzas later, we were putting away the beer at a record clip. Scott decided that now was a good time to experiment with the sloe gin. He slid a fingernail under the protective paper seal that secured the cap and ripped it from the bottle. He spun the lid. Raising one of my mom’s everyday juice glasses, Scott tipped the mouth of the bottle and the viscous elixir slowly dripped out. It was thick and red and very unappealing

“Eeechhh!,” I said, “That looks disgusting! You’re not really gonna drink that shit, are you?’

Scott didn’t even wait for me to finish my question. He knocked back the initial serving and poured himself another. He followed that with two more, each one containing slightly more than the previous. Alan and I continued downing beers, several times turning down Scott’s offer to share. As the time ticked away, beer cans were drained, empty pizza boxes were tossed and soon we were all reeling to find a comfortable place to fall asleep. I fell across my bed. Alan crashed crosswise on my brother’s bed. (My brother found accommodations for himself at a friend’s house.) Scott stumbled and landed on the previously set-up folding cot at the foot of my bed. He was out like a light. I switched off my bedside lamp and the room was immersed in sweet, soothing, restful darkness.

Still groggy, I sat up in the dark and fumbled for the light switch. Alan muttered, “What’s going on?” I found the lamp and gave it a flick. The room was instantly illuminated. I looked down at the end of my bed and there was Scott. Eyes closed. Sound asleep. Mouth open and spewing — what looked like — gallons of red liquid. It was the entire contents of the sloe gin bottle that he had finished just hours before. I leaped out of bed and began to shake Scott awake.

Alan added, “I hope he doesn’t choke to death.” Nice one, Alan. That thought didn’t even cross my mind, but now that he brought it up, it was all I could think about! “Shit!,” I thought, “I can’t let my friend die here in my house. My mom’ll kill me!” Alan and I shook Scott more until his puffy eyes finally opened to slits and, with his mouth dripping with red vomit, he coughed out a confused “What?”

We helped Scott into an adjacent bathroom and wiped his face off with wet towel. He was sobering up and he seemed fine. Scott turned around and spotted the red-soaked sheets on the cot. A look of panic washed across his face. He sprang forward, ripped the sheets off the makeshift bed and headed back into the bathroom. He turned the faucet in the small sink on full blast and ran the sheets under the streaming water. Grabbing a bar of soap, he began scouring the sheets and the runoff splashed out in torrents of red.

“Oh, man, Josh,” Scott apologized, “your mom is gonna kill me for ruining these sheets.”

I explained that it was okay and that she would have been a lot madder if she returned from her vacation to a dead eighteen year-old.