The current challenge on Monday Artday is “astronaut”. 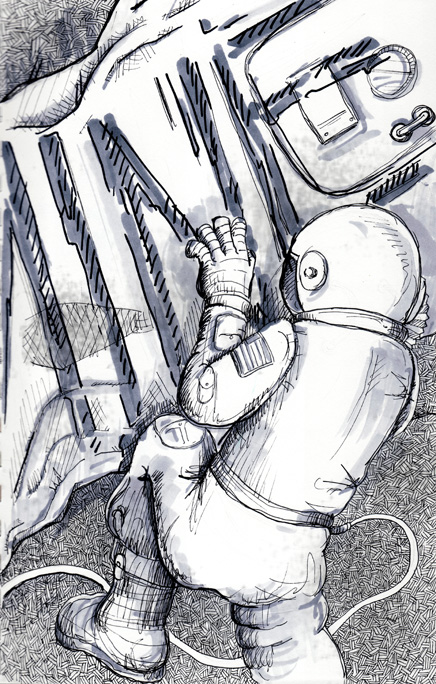 This illustration is based on this short story by this guy…

Your dub is dead, theres something wrong

The cosmic winds shifted, and the Hera probe battered about its tract of outer space. Inside, the two men in their heavy suits gripped the hand rests on their specially-designed seats as a wave of bad omens reverberated through the shell that surrounded them. Warren Bargeld, whose belly was just barely restrained by his protective outfit, signaled to his svelte partner, Corey Williams, to activate their communication link. Williams flicked a series of switches back and forth, and made a face. He turned back to Bargeld with raised eyebrows and shrugged his shoulders. Bargeld said something that Williams didn’t hear. In fact, neither man could hear anything outside of the whooshing of fluid in their respective ears. With verbal communication impossible, Bargeld reached for the pen that, while firmly tethered to a chain around his wrist, was floating freely in the starlit cabin. Scribbling something down on a piece of corn-fiber paper (good for note-taking and palate-cleansing), Bargeld struggled to finesse the implement with his gloved hands.

Now what, indeed. Or, at least thats what Williams would have said. Without their communication link, one of the two of them may have just as well stayed back on Earth. Interrupting Williams thoughts was a blast of light from a monitor that sat between the two men. The static-stricken screen settled on an image of Marcus Mell in his finest blast-off shirt and moustache. A headset wrapped around his comb-over, Mell barked orders and cries of concern, all of which went seen but unheard by the spacemen. Looking at each other, and then at the screen, Williams and Bargeld shrugged their shoulders in unison; a synchronized white flag routine. Not grasping what was wrong, Mell continued to shout into his microphone, leading the men around him in the command center to plug their ears with their fingers. One such ear-plugger tapped Mell on the shoulder and explained how the Heras turbulent takeoff had disabled their communication link. Mell stood silent for a moment, his mind racing to think of a solution before anyone else did. Bargeld waved his think paw as frantically as he could at the camera. It finally caught Mells attention, but Bargeld and Williams were miming to each other. Squinting through his massive glasses, Mell tried to make out from the fuzzy visual feed just what those men were up to.

Bargeld pointed at Williams. Williams pointed at himself with a look of surprise and shook his head from side to side. Bargeld clasped his giant hands together, silently pleading for his partner to go. With a slight fogging of his visor, Williams detached the elaborate series of harnesses that secured him to his post. Jaunting back and forth in a walk that was more of a bounding waltz, Williams strode toward the airlock, affixed a canvas rope to his suit, and opened the first door. Once that door was securely shut, Williams opened the outer door and stepped out into the nothingness. Drifting around the side of the craft, Williams gazed into the void of the universe. Even if he could hear anything (the noise of his air supply tube created an unending cathartic howl), there was nothing he could say that would be worth hearing. Using the handrails conveniently installed around the hull of the probe, Williams inched himself over to the area of impact. Though they didn’t sustain any serious injuries, Williams and Bargeld were shaken loose of their seats grips when whatever hit the Hera hit the Hera. As Williams surveyed the damage, a pattern emerged from the blackened carcass of the craft. Fearing his tether to be short and his air supply shorter, Williams forwent further examination and return to the airlock.

Back inside, Williams gestured to the remote camera, which Bargeld deployed without knowing what to look for. Like lovers guiding each other on a pottery wheel, Williams and Bargeld maneuvered the camera to read the one-word claim that had been emblazoned across their lowly vessel. Together they mouthed its horrendous syllable: