This week’s Monday Artday challenge is an unusual one ― “half beast“. 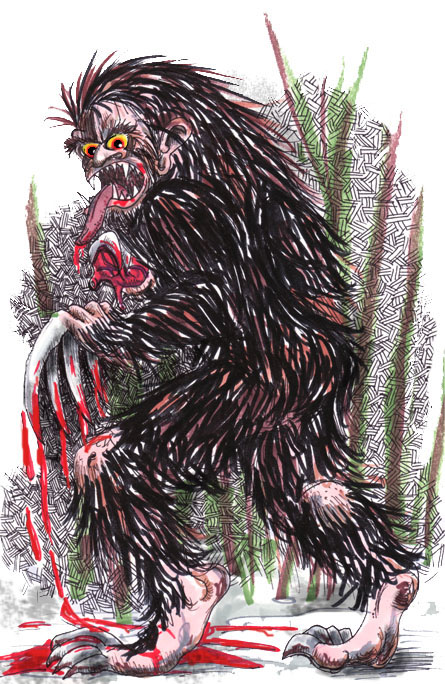 Somewhere between Bigfoot and werewolves is the legend of the wendigo. The wendigo is a figure appearing in Algonquian Indian mythology. In remote forest areas, sometimes groups of travellers, hunters or campers were cut off from the rest of their party by the bitter snows and ice of the north woods. Conditions became desperate and cannibalism became a necessity in order to survive. The belief was when a human ate human flesh, he would become a wendigo. Among northern Algonquian cultures, cannibalism, even to save one’s own life, was viewed as a serious taboo; the proper response to famine was suicide or resignation to death. On one level, the Wendigo myth thus worked as a deterrent and a warning against resorting to cannibalism; those who did would become Wendigo monsters themselves.
Though all of the descriptions of the creature vary slightly, the Wendigo is generally said to have glowing eyes, long yellowed fangs and overly long tongues. Most have a sallow, yellowish skin and are covered with matted hair. They give off a strange and eerie odor of decay and decomposition. They are tall and lanky and are driven by a horrible hunger.
Wendigos were embodiments of gluttony, greed, and excess; never satisfied after killing and consuming one person, they were constantly searching for new victims.
Native Americans actively believed in, and searched for, the Wendigo. One of the most famous Wendigo hunters was a Cree Indian named Jack Fiddler. He claimed to have killed at least 14 of the creatures in his lifetime, although the last murder resulted in his imprisonment at the age of 87. In October 1907, Fiddler and his brother, Joseph, were tried for the murder of a Cree Indian woman. They both pleaded guilty to the crime but defended themselves by stating that the woman had been possessed by the spirit of a Wendigo and was on the verge of transforming into one entirely. According to their defense, she had to be killed before she murdered other members of the tribe. The brothers were to be tired. Just before the trial, Jack escaped and hanged himself. Joseph went to trial and was sentenced to death. No word on his last meal.