The challenge on Illustration Friday this week is “tales and legends“. This is my second entry for this challenge. My first one can be seen HERE. 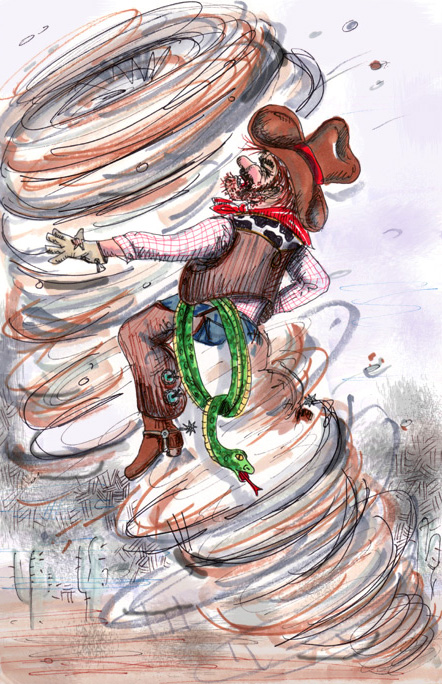 The legend of Pecos Bill grew out of the imagination of southwestern range hands who told tall tales to pass the time. The story goes that Pecos Bill, the youngest of eighteen children of a Texas pioneer, was lost in crossing the Pecos River and was brought up by coyotes. He considered himself a coyote until a cowboy convinced him of his true identity, a human being. After returning to civilized territory, Pecos Bill became the cowhand who invented all the tricks of the ranching trade; in various tales he appears as a buffalo hunter, cattleman, railroad contractor, and oilfield worker. His activities include teaching gophers to dig postholes, using a snake as a rope and roping whole herds of cattle at one time. He rode everything in the West, including a mountain lion and a cyclone. He invented the branding iron to stop cattle rustling and the cowboy song to soothe the cattle. On their wedding day, Slue-Foot Sue, Pecos Bill’s girl friend, was determined to ride Bill’s famous horse, the Widow-Maker, but the animal pitched Sue so high that she almost hit the moon. Her steel-spring bustle continued to bounce her so high that Bill finally shot her to keep her from starving. Pecos Bill’s death is a matter of controversy. Some cowboys say that he died from drinking fishhooks with his whiskey and nitroglycerin; others insist that he died laughing at dudes who called themselves cowboys. Whatever the mode of his death, Pecos Bill exists in cowboy folklore as a symbol of the endurance, enterprise and other qualities required of cowboys.