The illustrationfriday.com challenge word this week is “superstition“. 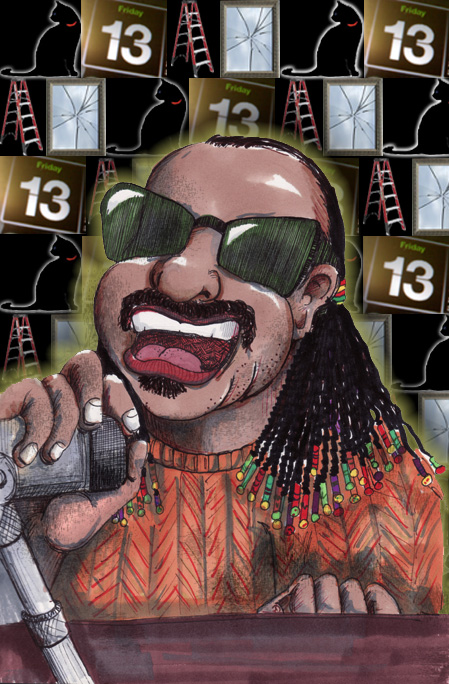 Stevland Hardaway Judkins (his name was later changed to Stevland Hardaway Morris) born prematurely in Saginaw, Michigan to Lula Mae Hardaway on May 13, 1950. It is thought that he received excessive oxygen in his incubator which led to retinopathy of prematurity, a destructive ocular disorder affecting the retina, characterized by abnormal growth of blood vessels, scarring, and sometimes retinal detachment. Mrs. Hardaway instructed her other children to treat Stevland the same as any other child, and not to tease or over-assist him because of his blindness. The family moved to Detroit and Stevland began singing and playing instruments in church at an early age. He took to the piano, congas, and harmonica in particular. He was educated at the Michigan School for the Blind in Lansing, where he was trained in classical piano.
In 1962, at the age of 12, Stevie was introduced to Ronnie White of the popular Motown act The Miracles. White brought Stevie and his mother to Motown Records. Impressed by the young musician, Motown CEO Berry Gordy signed Stevie to Motown’s Tamla label with the name Little Stevie Wonder.
At the age of 13, Little Stevie Wonder had his first major hit, “Fingertips (Pt. 2)”, a 1963 single taken from a live recording of a Motor Town Revue performance. The song, featuring Wonder on vocals, bongos, and harmonica, and a young Marvin Gaye on drums, was a #1 hit on the US pop charts and launched him into the public consciousness. Dropping the “Little” from his moniker, Stevie went on to have a number of other hits during the mid-1960s. He also began to work in the Motown songwriting department, composing songs both for himself and his labelmates, including “Tears of a Clown“, the number one hit performed by Smokey Robinson & the Miracles.
In 1972, Stevie wrote “Superstition“. It reached number one in the USA, and number eleven in the UK, in February 1973. Stevie had actually written this song for Jeff Beck, but at the insistence of his own manager, Stevie recorded it first. Beck was instead offered “Cause We’ve Ended As Lovers“, which he recorded for 1975’s Blow by Blow. Jeff Beck played guitar on Stevie’s version of the song and later recorded his own version of “Superstition” with Beck, Bogert & Appice.