The challenge this week on illustration friday is “the blues” 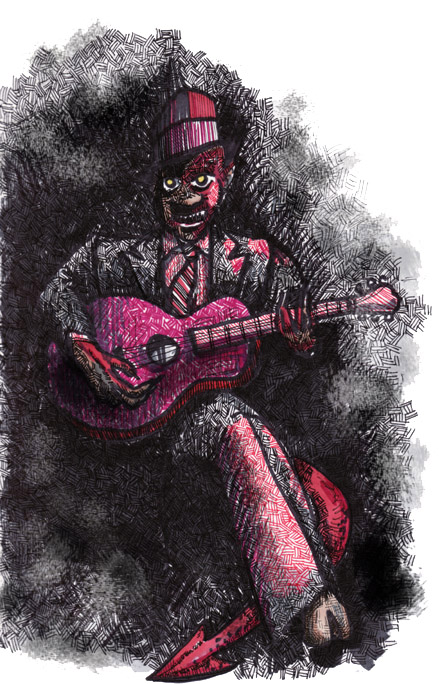 Robert Johnson is one of the most famous Delta Blues musicians. He displayed a combination of singing, guitar skills, and songwriting talent that have influenced generations of musicians including Led Zeppelin, Bob Dylan, Jimi Hendrix, The Allman Brothers Band, The Rolling Stones, The White Stripes, The Black Keys, Peter Gabriel, Neil Young, Warren Zevon and Eric Clapton, who called Johnson “the most important blues musician who ever lived.”

The most famous legend surrounding Robert Johnson is that he sold his soul to the devil in exchange for his unmatched guitar playing ability. Johnson sometimes played with his back to the audience in order to hide his technique.

His death occurred on August 16, 1938, at the age of 27 at a little country crossroads near Greenwood, Mississippi. He had been playing for a few weeks at a country dance in a town about 15 miles from Greenwood. There are a number of accounts and theories regarding the events preceding Johnson’s death. One of these is that one evening Johnson began flirting with a woman at a dance. One version of this rumor says she was the wife of the juke joint owner, while another suggests she was a married woman he had been secretly seeing. When Johnson was offered an open bottle of whiskey, his friend and fellow blues legend Sonny Boy Williamson knocked the bottle out of his hand, informing him that he should never drink from an offered bottle that has already been opened. Johnson allegedly said, “don’t ever knock a bottle out of my hand”. Soon after, he was offered another open bottle and accepted it. That bottle was laced with strychnine. Johnson survived the initial poisoning only to succumb to pneumonia three days later, in his weakened state. The fate of his soul is undetermined.